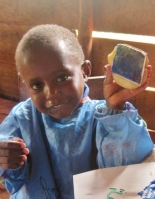 Sadi’s Grandmother has said she thinks the devil got into him. She says it with a sigh and a sadness which demonstrates her deep love for the boy. She does not blame him, or make him suffer in any way for this. But this is what she and most of the community at large believes. The devil got into him.

To us, Sadi is a delight. He brings light and joy into even my most stressful days. We laugh together, play together and despite his dramatic language delay, we chat together in a mixture of English, Lusoga and pre-verbal babble. Sure, sometimes he bites us, stabs us with a pencil or throws a shoe at us, but that’s just par for course when working with children like Sadi.
Sadi has severe communication, social and behavioural difficulties. In the UK he would most probably be diagnosed with an autistic spectrum disorder, but since that is almost impossible in Uganda, he is just Sadi.

Sadi was born to a single mother, who unable to cope with his constant screaming, crying and head banging entrusted his care to the grandmother at the age of 2. Sadi lives with around 18 other children who share his care since he needs constant attention to ensure his own and other’s safety.

His grandmother, or Daada, dotes on him. She sleeps with him in her bed so she can sooth his night terrors, she helps him to bathe and eat and she rocks him in her arms when the “daemon’s come to attack him” and cause him to lash out at himself or others.
Since joining the Small Steps Foundation SEN Class at Glory Be Nursery there has been a dramatic change in Sadi. Previously nonverbal until the age of 5, Sadi learns new words daily and enjoys sharing his linguistic knowledge with others. Our amazing teachers and support staff have nurtured Sadi and drawn out of him so much knowledge. He can now count, recognise some letters, toilet himself, brush his teeth and share toys. Most impressively of all, he can now go a whole day without an incident of challenging behaviour.
Initially it came as a surprise, but Sadi is popular at nursery. Every child wants to be friends with this quirky, creative, fun loving little boy.
I will write a lot about Sadi in times to come as he is a constant source of inspiration and joy to me. So now, hopefully you know a bit about his background.

Our Co-Founder and Project Manager Cat is blogging about her insights on the world of disability in Uganda.

For volunteering and general enquiries: